It’s been over 6 months since our last update, and we know that you are just jonesing for some new fezzy goodness. Today’s update brings 11 new fezzes into the collection for you to enjoy.

Stop by the Knights of Omar exhibit to check out a new addition to this rare collection.

The Grotto display also got an update, with a sweet Big Six fez from the famous marching unit.

Pythian fans can rejoice with an update to the Knights of Khorassan area. The question is, why is the tassel red – you decide!

Two new fezzes were added to the IOOF Social Bodies exhibit – one from the OOH&P and another early AMOS example.

Last, but certainly not least, are several additions to our Shriners exhibit, including odd variations of the Shrine logo from Zamora Shriners and Moolah Shriners, as well as examples from Islam Shriners, Zem Zem Shriners, and a very special Grand Master’s fez from Jaffa Shriners.

We hope you are having a great summer and look forward to our next update!

What?!? Another update? That’s preposterous!

Yes, friends, you read right. We are back with another (small) fezzy update. You see, your faithful fezzy friend has come down with the 2022 ick and has found himself with some time on his hands. We had three fezzes that weren’t posted before, so now seemed like a great time to get them added to the museum. We hope you enjoy!

Strut on over to the Animal Lodges display to check out a new not-quite-a-fez from the Fraternal Order of Orioles. At least with think it’s from the Orioles. You can decide.

Our other two pieces are related to the Independent Order of Odd Fellows. First up is a new Junior Lodge fez, a relative rarity in the IOOF fez collecting world. Also, we’ve added a new AMOS piece in the IOOF social bodies section. It’s an old Cahokia Sanctorum fez that is in amazing shape for its age.

Thank you for your continued interest and support!

It’s amazing how quickly time flies. Our last update was made in February 2021. We are settled into our new home and have continued collecting. Overall, our acquisitions have slowed as our tastes have refined and the more unusual pieces remain hard to come by. Fear not! Even if we aren’t posting, we work hard to respond to all inquiries in a timely manner.

Before we get into today’s updates, we want to share a special project with you. This fall, the Indiana University system made a significant stride in the advancement of fraternal research. Thanks to Dr. Heather Calloway, Executive Director of Collections, the school authorized the creation of the Center for Fraternal Collections and Research. This new arm of the University has been authorized to collect and curate fraternal artifacts from across the country. It is the only center of its kind in America and deserves our robust support. If you have some spare change, please consider making a tax deductible donation to the Center.

The plan is to officially gift our collection to the IU Center once it has an appropriate endowment to care for the items. We appreciate your support of our work and this cause.

Now, on to the updates!

We’ll start with a new fez over in the Shriners International exhibit. We don’t actively pursue many Shriners fezzes these days because they are so common. But, when we saw a white fez from India Shriners, of Oklahoma City, we knew it was a find.

“You’re a Nobwah!” Sounds a bit slanderous, doesn’t it? But, if you were into pranking some new initiates, you might have found yourself among the Nobwahs of Sacramento Pyramid No. 3 of the Ancient Egyptian Order of Sciots.

We added a very early and unique fez from the Moose Legion as well. Dating from the early 1900’s, this fez features some very swanky bullion and crushed velvet.

It’s been a while since we gave our friends at Fez-o-rama a shout out. They recently re-released the “Double Cross” fez, commemorating Charlie Chaplin’s famed 1940 film the Great Dictator. While the fez is Just for Fun, the movie it was based upon is a serious piece of cinematic history.

When collecting, one of the things we look for are titles on the fezzes. That’s why we added a new Imperial Secretary’s fez over in the Dramatic Order Knights of Khorassan exhibit. It might not be old, but it is relatively rare.

We are always on the hunt for fezzes relating to the early Odd Fellows Social Groups. Thanks to a keen-eyed friend of the museum, we were able to snag a fez from Zorah Palace No. 12, Pilgrim Knights of Oriental Splendor. This is only our third Pilgrim Knights fez, making it a welcome addition.

Last, and certainly not least, is a new area in our Order of Alhambra exhibit. Thanks to a generous donor, we were gifted three fezzes from Osma Caravan of Maryland. The fezzes demonstrate the advancement in rank of a member, from new initiate to Past Grand Commander and, later, Grand Scribe. These are really nice fezzes that you won’t want to miss.

We hope everyone had a great Thanksgiving and wish you the best for an excellent holiday season!

Since our last update in October, the fez museum has moved to a new home. We are still sorting through many of the boxes while attempting to keep the collection safe and sound. In the mean time, we discovered several fezzes that were purchased during 2020 that we hadn’t yet posted. That means more fez based excitement for you!

We start over in the Prince Hall Ladies Imperial Court exhibit (formerly known as the Daughters of Isis)  with a Past Imperial Commandress fez. If you’ve every wanted to feel fez envy, this rhinstone encrusted hat will definitely give you the vapors! While you are there, you can also check out the addition of a Council of Crusaders fez, worn by Prince Hall ladies related to a Knights Templar.

Keeping with the ladies auxiliary theme, we’ve also added a new short-style Grotto-ettes fez over in the Grotto exhibit. Somehow we just know these ladies liked to party!

For those looking for something more spiritual, we’ve added a relatively rare blue Knights of the All Seeing Eye fez. This group has a fascinating history that you definitely need to explore.

Hot on the heels of our recent purchase of a red fez, we’ve added a black Dramatic Order Knights of Omar fez. It’s an usual design that we haven’t encountered before, making it perfect for the collection.

Next up, we have a variation on the fezzes used by the AHEPA.  This new piece was owned by a District Governor and has some unusual embroidery.

Last, but certainly not least, is a completely new exhibit. This space, dedicated to the Order of the Eastern Star, now displays a very old and very rare Patrol fez. Though in poor condition, it makes a great addition to our humble museum.

For those that are curious, this site now details more than 225 different fezzes. The full collection contains even more hats than this, as only interesting variations are shown here. We are proud to be the internet’s most complete guide to fraternal headgear.

That’s all for this update, folks! Keep checking back. You never know when we’ll add more fezzes!

COVID Can’t Keep Us Down! 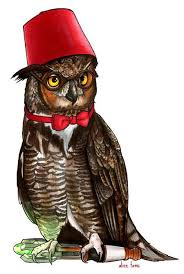 Back in March, just as the pandemic started, we finally took some time to update this website. Since that time, we’ve continued with our fezzy endeavors. The pandemic turned out to be quite the time for fez collecting! We’re pleased to be adding seven new fezzes to the site with this update. Let’s dive into the new additions.

We’re excited to add a Knights of Peter Claver fez to the collection. This helps to round out this exhibit and show the primary style of fez used by the organization.

The Knights of the Macabees received a rare addition, with a molded red fez, embroidered with bullion thread. Definitely check this one out!

The Imperial Order of Muscovites has long been a primary interest of the Fez Museum. We recently acquired a rare, white Muscovites fez at auction. There are only a few of these fezzes in existence, so we are very excited to have one in our collection.

Shriners fezzes often pass our desk, and we usually don’t accept them as gifts. But, an Aladdin Shrine fez was recently added to the collection because it provides a unique look into a manufacturing technique.

Grotto Ladies Auxiliary  fezzes are a strange sub-genre that we love collecting. These low profile fezzes are very different. We have a new one from Kallipolis Grotto in Washington, D.C., now on display.

Everyone wants to be a Grand Poohbah, right? Well, the Sciots had a great sense of humor and created a Pooh Bah fez for someone in their Fresno Pyramid. We love this piece and hope that you do too!

Last, but certainly not least, is the addition of a Philadelphia Lambskin Club fez, courtesy of friend of the museum Tyler Anderson. It’s a cool, kitschy fez with a piece of Masonic apron sewn directly onto the fez.

That’s it for now. We are continuing to actively source fezzes for the collection. Keep checking back… you never know when an update might occur!